I always fret about posting on a Saturday as it usually seems to be the day that no one goes on the internet, but unfortunately I didn't manage to finish this week's project in time for posting yesterday.

The reason it took longer than I expected was that I was learning an advanced quilling tehnique, and this was my first attempt! The technique is called 'Husking', and involves the use of a pattern and pins to construct the piece. I've included some 'during' shots to show you what I mean. 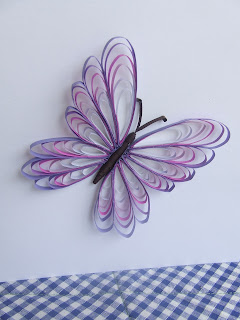 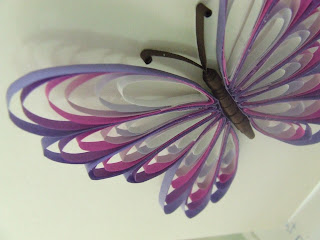 So, this will give you an idea of what husking is. 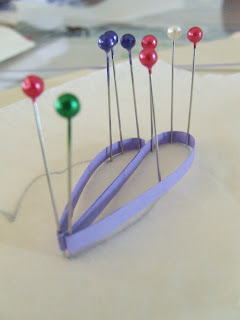 I drew a basic outline of the wings on a piece of card, and put a foam board underneath it and a piece of baking paper on top, then placed pins at extreme points on the design. Then you put the paper around and glue it in place, and so on and so forth. 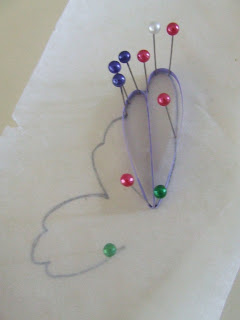 I only did it for the outline, then removed the wings from their little pin frame and filled them in by hand. The cool thing about this is that you can get the shape just right, and as it's independant of the card, potentially I could make freestanding butterflies, much like the snowflakes! I see the making of a butterfly mobile in my future... 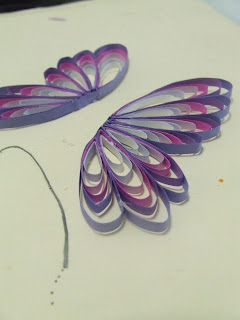 I made the body with a normal quilling tool, making a series of cone shapes and then gluing them together. I then mounted the body to the card, and glued down the wings on a tilt so they don't sit flush on the card, to give it a bit of life. As you can see below I used a bunch of quilling strips to prop them up until the glue dried. 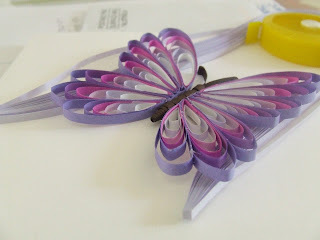 The wind knocked it over during my little photo shoot, but I noticed that would be a good way to show the angle that the wings sit at. 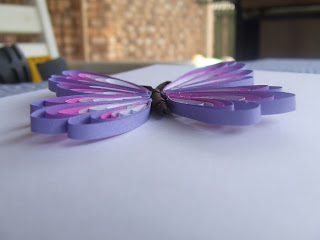 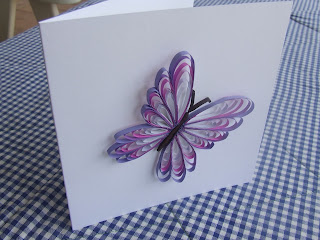 Voila! I know I'll be making more of these.

Week eight will be here before you know it, and it brings another winged creature!

WOW! just amazing..i think i say that every time but it is what springs to mind. i hope you get some people stopping by on a saturday, this little butterfly needs to be seen. xxrosey

Thanks for your tutorial. The butterfly is pretty.

Welcome to my Blog!

nart
Renata is a multi-tasking mum of two who likes to spend what little spare time there is in a day drawing, trying out different art forms. My new blog is https://artxnart.blogspot.com.au/ ! My old blog, devoted solely to quilling, is http://polkadotparasoldesigns.blogspot.com.au/ and still seems to get a steady amount of traffic from pinterest and other quilling enthusiasts! I'm glad that sharing that particular artistic passion has inspired others, and I hope that in the future I'll have the inspiration and time to revisit that craft and give my lovely audience more!

Please go and donate to help the koalas!

Promote Your Page Too